We had a great winter this year.  Moored in Auxonne with several other barges, mainly occupied by Brits but also Australians, Canadians, New Zealanders and Americans, we enjoyed the social scene which consisted of meeting at Charley’s bar each Friday at 5pm, gathering on one barge or another each Wednesday evening for a meal followed by a game of Articulate, Trivia or Cards Against Humanity (amongst others) and the occasional barbeque.

Whilst in the UK in November, we’d viewed and made an offer on a house in Essex and in late Feb we finally completed the deal.  We visited our friends, Felix, Hedwig and Barbara, to enjoy a music night in the Café Merlette and collect our trailer full of belongings to take back to the UK.

By mid-March the coronavirus was creeping slowly around the world but we decided to continue with our plans to get the trailer back to the UK and did so on Friday 13th March.  A few days later France went into lock down.  We knew the UK would follow suit soon after and we had a decision to make – should we stay or should we go!

In some ways the decision was easy, we stayed.  Nick might have regretted his generous offer of us staying with him for the week when it turned into 14 weeks, but to his credit he never showed it!

Our new house, which is actually 1950’s built, needed significant remodelling and modernisation so we set about finding local tradesmen who were happy to continue working throughout lock down, bearing in mind we were not living at the house and we ensured we took all necessary precautions with regard to hand washing and hygiene.

Over those 14 weeks we (Frank) knocked down walls, ripped up all the carpets, had a small extension built, stripped every piece of wallpaper off, created a lovely kitchen/diner, turned an old shed into a beach hut, created wardrobes in the main bedroom, re-plumbed and rewired the entire house and generally put our time to good use.

In late June the time came and we journeyed back to France to meet up with our port buddies and get Thirza ready for the final trip home, now condensed into 3 months instead of the 6 months we had originally planned.  Hey ho, worse things happen at sea.

On Sunday 28th June we left Auxonne to start our next adventure with our first stop being St Jean de Losne, where we were joined by Bob and Nicola on Vagabond and Sally and Glenn from Boschplaat (sorry if I’ve spelt it wrong guys!).  We stayed a couple of days and had lovely meals together in one of the riverside restaurants before heading for the Canal du Rhone a Rhine, entering via the lock at St Symphorien.

The first evening we stopped at Dole, having trekked up the first stretch of canal, with nothing to really write home about.  Dole is a lovely town but limited in its mooring places for barges.  There are plenty of short finger pontoons provided by the town, used mainly as storage for the Nicols hire boats, and we perched Thirza, bows-in, onto one of them without too much bother.  Water and electric are available in abundance here and we tried 3 times to visit the Capitanerie to pay, but each time it was closed so we left at 9:30am the following morning with a full ships purse.  Result!

That evening, just as we were about to abandon hope of finding a suitable berth, we exited lock number 58N and found a perfect spot on the right bank.  With no cars or traffic to worry about the boys had their freedom to do their own thing and we cooked our first piri piri soaked spatchcock chicken on our new Weber BBQ .  With a side of homemade tzatziki and fresh bread we dined like kings!  It certainly felt like it as we ripped chunks of spicy meat off the carcass!

The following afternoon (Thursday 2nd July) We arrived at the lovely town of Besancon, wrapped around by the Doubs we followed it’s contour and exited through the manual St Paul Lock before settling for a couple of days on the long public pontoon, very close to the heart of the town.  It was a welcome break, unlike the accident I had in one lock when Thirza suddenly surged forwards (unusual, you normally surge backwards) and despite me having 2 turns round the stanchion I was unable to hang on and as the bitter end of the rope slipped from my hand the pressure it was under as I let it go was immense and it whiplashed my leg.  “Ouch” was not the word I cried out.  Fortunately, apart from some grazing and a sizeable lump there was no real damage. 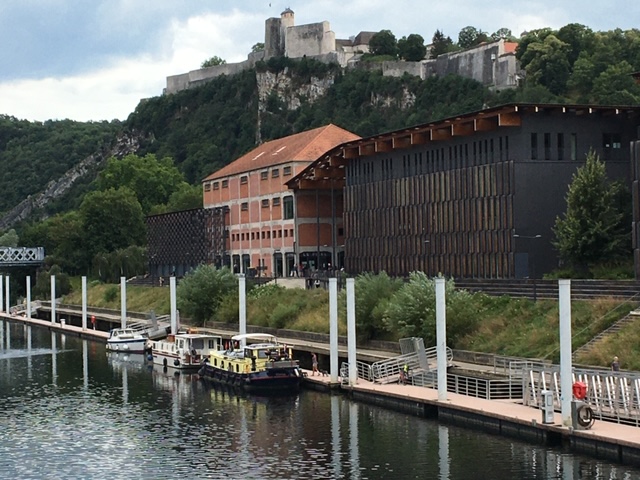 We had a lovely couple of days sightseeing and were glad to have seen the ruins of a sunken Roman Amphitheatre leading up to the 17th-century, 11 hectare Citadelle, designed by Sébastien Le Prestre de Vauban.

Having sampled the local cuisine the first night we decided the following night to have chicken piri piri wraps with salad, one of Nick’s culinary creations that he introduced us to (thanks Nick!), and set the BBQ up on the pontoon.  It was delish!  That night (last night) at about 3am we were woken by music and voices.  Lots and lots and lots of voices.  Literally hundreds of youngsters converged on the steps above the port for an all-night rave.  There was shouting, screaming, fights broke out, the music blared, some people came onto the pontoon having climbed over the security gates, and we had no option but to stay quiet and vigilant.  To ask them to leave would have made targets of ourselves – sometimes discretion is the better part of valour!