We decided to stay for a while in Salleles d’Aude because there were celebrations lined up for Bastille Day and we’d been told by the locals that the thing really worth staying for was the Eau, Terre et Vin Festival, an annual event due to take place the following weekend.

Friday night we wandered into the Place de la Republic where the local Pompiers had set up a bar and laid on a disco for the kids, which included a huge foam machine aimed over the makeshift dance floor, inactive for now but poised for action. As soon as there was a good number of kids on the dance floor the machine was switched on and foam poured over anyone and everyone who was within reach. It wasn’t long before most of the adults joined in and everywhere you looked people were covered in masses of foamy bubbles. It was a lot of fun to watch!

Saturday was Bastille Day and again the Pompiers laid on entertainment and a meal that cost just €14 per person. It included a starter, main, desert and as much wine as you could drink. We got our moneys worth! After the meal everyone walked to the bridge by the lock to watch a firework display over the water. We headed back to the boat to put the dogs inside then sat on deck in our big comfy ring-side seats to enjoy the show. After the fireworks everyone trouped back to the square for some live music that went on late into the night.

Having found a great place to swim when we were down at Gailhousty lock, next to the dry dock, we decided to see if we could get the dogs on the scooter so we could all head back there for a swim. The temperatures were soaring and the heatwave was still yet to hit so we figured some hours spent by cool waters each day could only be a good thing. We loaded Brody into a rucksack that Frank wore back-to-front and pearched Bosun on my lap, sandwiched between us, and headed off to the river. It worked a treat and after a couple of trips Brody started to get excited as soon as he saw the rucksack coming out! 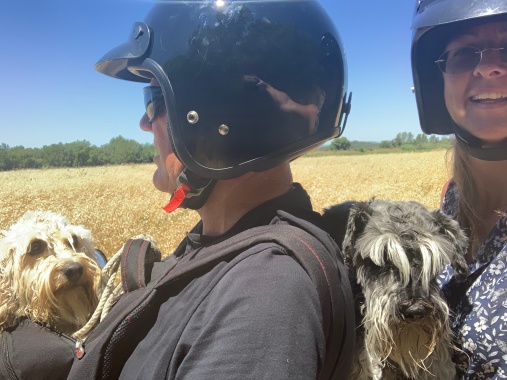 The place we went to was lovely. A good flow of water meant it couldn’t stagnate and a weir above our spot kept most branches, leaves and other flotsam to a minimum. We really enjoyed our daily swim and are delighted to have found a method to ferry the boys about on the scooter. If you read their blog you’ll find they feel the same!

Salleles is a lovely town and there is a fairly good contingent of Brits living here, which for us meant being able to socialise and mingle quite nicely. There is only one bar in the small town and so the great and the good meet there at some point or another and it’s where we met Jan and Linda with their lovely black schnauzer Freddy. Poor Freddy was poisoned a few years ago while they were in Spain and is now suffering teriminal illness as a result. On hearing this devastating news Jan and Linda have made it their mission to give him the best of everything for as long as they can, so Freddy lives like a prince – quite right too!

We also met Lorna and Marcus, who have a cottage in an enviable position overlooking the port, right next to the lock. Lorna has started her own business as a small Artisan creating prints, greetings cards, postcards and business cards from pictures with unique styling. She told us she’d taken some photos of Thirza in the port and did we want to see what she could create for us? Definitely! We’ve lost count how many times we’ve seen pictures and videos being taken of Thirza but it is very rare to see the resulting image. This time we not only got to see the image but also styled by Lorna! We love her work so much we’ve ordered a bunch of stuff and can’t wait for it all to be ready.

Really sweet of her, Lorna sent us a styled picture she took of the boys and they can’t wait to show it off on their blog! I’ve included Lorna’s company details at the end.

As the week progressed a number of boats and barges moored in the port waiting for the festival due to start on Saturday. We’d been told the weekend festivities would include a market with local artisans selling their products and creations, Lorna among them, and on Sunday there would be a huge Vide Grenier, or boot sale to us Brits. There was water jousting lined up both days, were men in boats approach each other and the jouster positioned at the back of the boat on a raised platform attempts to engage with his rival in a bid to knock him off his pedestal with a very long lance. It almost always ends up with one of the competitors in the water.

A couple of pop-up bars were set up and a replica post boat gave a lovely demonstration of being pulled along the canal by a draft horse, the original vessel operating in 1681. 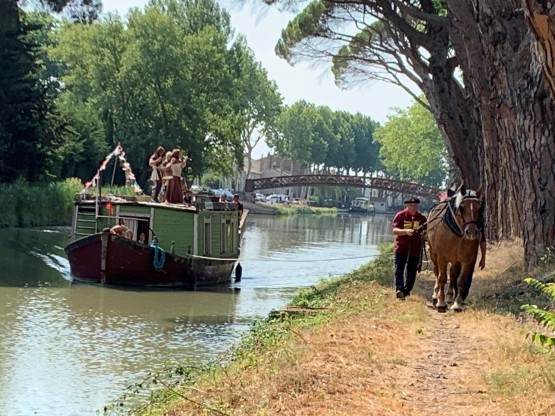 All the vessels in the port were in pole-position for the festival and we invited our friends Sheila and Alan to join us for the fun. Then Friday morning we were all served with an eviction notice saying we couldn’t be in the port for a few hours on Saturday and Sunday afternoon. There were protests and arguments from all those affected but the ones we felt most sorry for were Peter and Ruth from Austria who had a broken gearbox and were unable to move unaided. After some toing and froing two barges left and as soon as Sheila and Alan arrived we followed suit.

We didn’t go far, just up past the next lock and when one of the other barges got kicked off the waiting pontoon for the lock and left in a huff, we waited until the locks closed for the evening, turned Thirza around and legitimately moored there for the rest of the evening. Bliss!

It was only about 500m back into town and we kept our table reservation in Chez Herve that evening.

The following morning we went back through the lock and sat in the port until we again had to vacate but this time we went downstream to just below the large lock in the town and again turned Thirza ready to come back through as soon as they reopened at 6pm. It was a bit of nautical Hokey Cokey but actually made it more fun and we were so glad we didn’t just leave like all the rest. All, except Peter and Ruth who remained moored in the port after the VNF took pity on them and their plight and left them alone……perfect!

Sheila and Alan left Sunday evening and as I had payroll to push through for work we decided to stay until Tuesday. It was handy to discover they’d left in place the temporary electrical points that had been provided for stall holders so we plugged in, charged up and had full in electricity for the rest of our stay!

We left Salleles d’Aude Tuesday afternoon with a warm feeling, like we’d been among friends for a couple of weeks – well, we had. It’s a lovely place that we would recommend to anyone.

Frank cycled up to set the 6 locks taking us out of the canal du jonction back into the canal du Midi proper. Yes, that meant I took Thirza on my own and threw the ropes to Frank each time I reached a lock. It was good for me to do this on my own – although I have helmed Thirza on many occasions I’ve always had the comfort of knowing Frank is there if I screw up.

We pottered along the canal until we reached the Passenger Boat quay at Pont Sierge and as it was empty we stopped for the night. It was blissful and we heard our old friend the Scops Owl calling to a potential mate in the distance. The following morning we set off after breakfast and headed to Capestang. When we came through Capestang on our way to Carcassonne it was pouring with rain and we didn’t really get to enjoy the town. This time around as we came through the low bridge there was a spot right on the quay outside Le Batelier restaurant and bar. It was a fraction too small for us but the nice French privateer in front happily moved his boat back a couple of meters and we snuck in. As soon as the Capitainerie opened in the afternoon we checked we could stay where we were and booked in for a week.

There are a good number of Brits here too and a local couple wandered along with their young Westie, which of course meant a chat along with the obligatory Westie-fix. They told us about the illumination spectacle held every Wednesday evening in the square where they project images onto the walls of the church, Collegiale St-Etienne, and tell the story of Capestang, or Cap de l’Etang – head of the lake – as it was many many years ago. We went along and really enjoyed it, as much because the place was packed, noisy and a great atmosphere as well as the fun way the town’s history was portrayed.

So far we’ve had a couple of excellent meals in Le Batelier, and Frank sneaks in for a pint most lunchtimes, and why not! Breakfast for the past couple of days has been grabbing a pastry from the boulangerie in the square and taking it the Cafe de la Paix to enjoy with a small strong espresso. How nice this life is at times. We have nothing much planned for the rest of our stay here, although I’ve got a busy week of work coming up. But that’ll keep me out of mischief and afford Frank the opportunity to spend some of the beer tokens I’m earning!

If you have any digital photographs you would like Lorna to style for you please do get in touch with her by calling +33767259580 or email  littlefrenchgallery@gmail.com – she would love to hear from you!