The trip from Vias to Bezier was fairly uneventful; the scenery yet to become the pretty Midi we have been told about and that we’ve experienced during past holiday’s in the area. At about 12:30 we were stopped by the usual lunchtime lock closure at Villeneuve-les-Beziers and were delighted to find that the waiting quay for the lock was also the frontage of a restaurant. Don’t mind if I do! We had a very basic but enjoyable lunch and moved on towards Bezier.

As we left the last lock before the basin at Bezier the Maison Batelier came to ask if we intended to stay here and that he had some stern-to mooring space left. We can’t do bows or stern-to mooring because of the shape of Thirza – and stern-to is a definite no-no due to the scooter platform (and scooter) preventing us from being able to clamber over the back rail to the quay.

We thanked him but said we needed to continue if there was no space alongside and were almost instantly dismayed at the scene ahead of us. Dozens of bumper boats were milling around the basin waiting to go through the next lock and we were at the back of the queue. Handling Thirza takes a bit of getting used to and you soon learn that unless she has some kind of propulsion she will drift according to the current or wind conditions. Today the stiff breeze was gently pushing us towards the quay, and all the moored boats alongside.

Frank managed to keep her out of harms way for a while but soon we were midships with a similar sized barge called “effie” and I called out to see if anyone was on board. It was a shame that the response wasn’t “g’day mate” but it could have been as Phil, from Australia, came out and welcomed us to lay alongside while we waited our turn at the lock.

We chatted happily for a while and once the pandemonium had calmed we decided to take our luck with the space reserved for the passenger boats, just to see if we could get away with staying there for the night. The locks close at 7pm and as the basin is sandwiched between 2 locks you pretty much know that after 7 you won’t be disturbed – and so as luck would have it we had a very peaceful evening.

The following morning we ummed and ahhhed about whether to chance our arm and stay where we were or move on. Almost like someone had blown the whistle at a football match, the pandemonium started again at 8:45 in the morning and it seemed like every bumper boat on the canal system was pushing forward to claim their place in the queue for the lock.

Happily for us, two large barges that had been moored alongside near the Capitainerie joined the melee and so we knew there was now space in the main harbour. So we let go of the ropes, turned Thirza around (minus bowthruster – again giving up when we most needed it) and headed to the now empty quay.

Safely and neatly tucked into the corner of the basin, we disembarked the scooter and agreed with the Maison Batelier that we would stay for 2 more days so we could visit Bezier properly. He did mention that if we hadn’t vacated the Passenger Boat mooring when we did we was going to kick us off but he was happy to get us into the heart of his domain and paying for our keep. We made up for our indiscretion by allowing a French occupied bumper boat to moor alongside us for the duration of our stay and we were rewarded with a bottle of Rose for our trouble. No trouble at all!

The weather was lovely – perfect for painting and we took the opportunity to finish our recoat of Thirza’s deck, which completed the full repaint she’s had over the past 12 months since we hauled her out at Bradwell.

Bezier is a lovely town, but you have to get into the heart of it to really appreciate it’s worth. It has a wonderful park, The Plateau des Poètes, with memorials dedicated to Poets of the Occitane and an esplanade to rival those in Paris.

We visited St Nazaire Cathedral and were reminded that 20,000 innocents were massacred because the people of Bezier would not give up 150 of their Cathar neighbours to Pope Innocent III in his crusade to promote Christianity and wipe out heretics. A sad and unenlightened time indeed.

Happily for us, this all happened a very long time ago and it seems modern-day Pagan’s are able to go about their daily business without comment or criticism!

We decided to head off apres-midi on Thursday (16th May) and after we traversed the aquaduct over the river Orb (of course I jumped off to take the obligatory photo of Thirza in the foreground and St Nazaire Cathedral in the background) we made a slow but enjoyable passage to L’echelle de Fonserannes, nine rugby ball shaped locks in staircase formation. What could possibly go wrong?

We had been a little concerned about this part of the trip, but having successfully managed several oval locks without incident we were confident that it would be fine. As we entered the first lock on our own we breathed a sigh of relief as both lines were secured and Thirza was perfectly fendered. 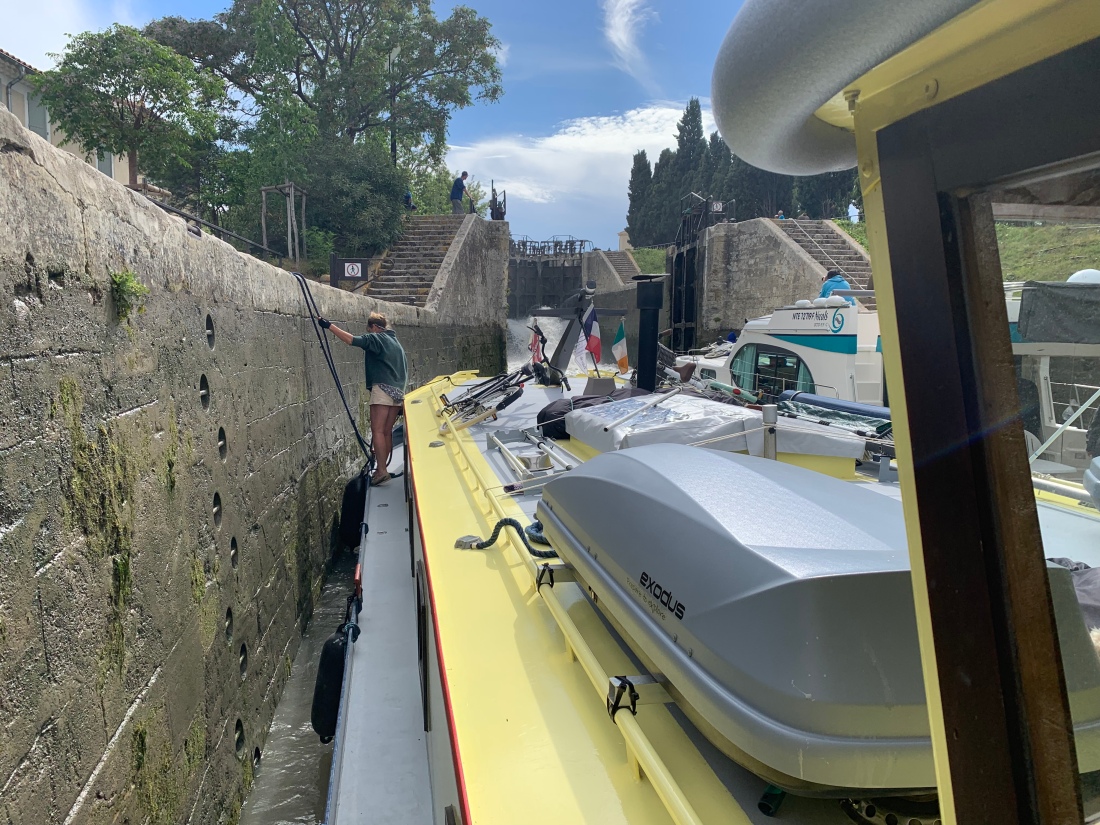 Then Alain Prost turned up in a 50ft bumper boat – drove into the lock like his life depended on it and gleefully helmed towards Thirza with the intention of using her as a means to bounce his boat back towards the other side of the lock.

Both Frank and I tried to maintain calm but calling out “lentement……..monsieur…… lentement!!” had no effect. He wasn’t listening – or didn’t care – and came on like a man possessed. Out came our fender just in time and we managed to stop any damage as he hit Thirza’s stern and bounced back towards his side of the lock.

“Slow down!! Lentement!!” was being shouted by both Frank and I but the response was to gun his engine even harder whilst telling us to mind our own business. At that point Anglo-French relations broke down and the air turned blue…red, white, green and gold!

What an arse. It was shame that when the Esclusier came along (eventually) he pretended not to understand my French and not to speak English and he had a good old laugh with Mr Prost about “Angleterre” and “Brexit”. The rest of the climb up the staircase was interesting, to say the least, but the worst part was the fact the Eclusier made sure we got no assistance at all. Until we insisted that he call his boss. When he arrived we explained to him what had happened and how we had been treated. He made sure we got all the help we needed thereafter and he apologised profusely for his member of staff.

That night we wild-moored just ahead of the tunnel at Malpas and had a very peaceful evening. Then it rained. And rained. And rained. All day Friday it rained….hard. We got to Capestang, and found a mooring within the harbour limits but it was shallow and we couldn’t get Thirza’s stern in – and there was a very muddy footpath next to us. We found out it was going to cost €27 to stay the night, without electric, or we continue on and pass through the dreaded Pont de Capestang.

This bridge has been the subject of much discussion between us and those that have passed through it, pretty much since we left the UK. It is low, narrow and odd-shaped. On Friday afternoon as the rained poured down and we silently fumed about paying €27 for a night in a place we couldn’t visit unless we were prepared to get soaking wet, Frank suggested we move on, through the bridge, because, after all, it might be pissing down but there is not a breath of wind. Nothing to change our course or randomly push us into the bridge.

So we went for it. Oh my, so sweet and easy that we passed through without even holding our breath. And on the other side of the bridge we found the bank was easy to moor along, not so dirty and outside the harbour’s jurisdiction….in other words, free!

We had a lovely night, in the pouring rain, and left in the morning having visited the lovely village of Capestang, it’s few shops, Le château des Archevêques de Narbonne and the ancient church La collégiale St Etienne, all within the part of the village that was built between the 10th and 13th Centuries.

Saturday morning we moved off and after just 10kms found a lovely spot to wild-moor. The boys had the best day doing what they wanted, when they wanted. As they both found their own spot to have a drink from the canal poor Bosun slipped and fell in. He tried to get out himself but couldn’t and I had to fish him out. Brody told him off in good style “how dare you go swimming without me”!

We were close to a hamlet called Pont de Seriege with a very fine restaurant and prices to match. We dined on roasted peppers to start, followed by filet steak with chunks of potatoes roasted with fine-cut red onions served with a delicious doughy bread with a crisp crust. So glad we decided to eat on board 😊

Since leaving Aigues-Mortes we have been fortunate enough to see some new bird species, for us.

The first was a flock of Bee-eaters darting in and out of a tree, giving a wonderful display of their plumage as we passed.

Then came a strange bird with a brown body and brilliant white wings that flew right past us. Almost immediately we spotted another on the bank ahead of us but it was a brown bird – it couldn’t be the same species – until it too took off and showed off it’s white wings. I had trouble finding it in the bird book but Frank found it amongst the heron’s – it was a Squacco Heron.

Next came the Pied Flycatcher that sat in the reeds next to boat whilst we were moored up so we were able to get a good look at him through the binoculars.