Sorry it’s been quite from our end – we have been busy and lazy at the same time. Having left Tournon we sauntered down to Valence. Well, that’s not quite true as the wind was blowing a hooley from the North with predictions it would increase further. Strong wind from the North is ok, it gives you an extra shove when you’re heading downstream but we can only sympathise with anyone trying to head up the Rhone against both current and wind.

In any case, for us it was ok and although there were no mooring possibilities on the finger pontoons we were able and welcome to moor on the fuel jetty at the entrance of the harbour.

First thing Sunday mooring, having topped up the tanks, we headed on down to Viviers. Before we left we had seen a Catamerang head out and he seemed to be flying down the river. At the first lock we caught up with “Little White Elephant” owned by a Dutchman named Sacko. That wasn’t his name but it was as close as we could muster and we shared the Ecluse Logis Neuf with him……and with Lord Byron, a 135m Rhone hotel cruiser. 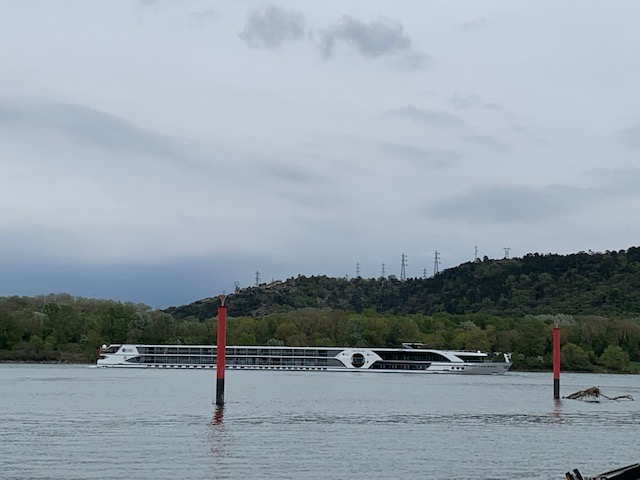 It is amazing to see these huge ships on the river and then go into a lock with them and have bags of room to spare! 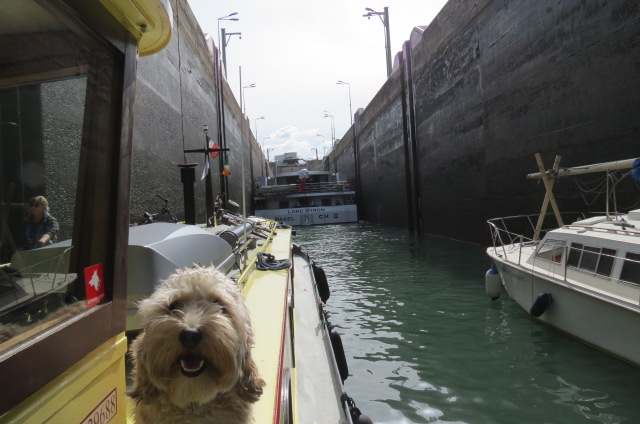 We also shared the next lock, Ecluse de Chateauneuf with Sacko and headed into Viviers together. Vivier is a beautiful place to stop and we ended up staying for 3 nights, even though there was no way of getting off the pontoon other than by using our very own ladder and no one had yet turned on the water and electric. No problem for us – we’d filled the water tanks in Tournon and the solar panels and generator meant we could do the washing whilst there!

We found a lovely little bar that served fine Ardeche wine of ‘home poured’ proportions and last night we tried their Brochette du Bouef, which proved to be worth every cent of the €40 it cost (with a few glasses of vin, a couple of petit café’s and the obligatory tip!).

This morning, Thursday 18th (that’s a reminder for me BTW) we set off quite early with the intention of stopping at St Etienne des Sorts, somewhere we had stopped in 2002 and spent an entertaining few hours trying to capture the perfect picture of a passing TGV. It’s almost impossible with a digital camera because by the time you see the train, hit the button and wait for the photo to be taken the train is in Avignon! We got pickled that night and did finally get the pic we wanted but Round 2 eluded us as the pontoon for pleasure craft was not there. Still, we’d probably had all the excitement we needed today in the shape and form of the Ecluse de Bollene.

Oh my, what a lock. It never fails to impress. All the Rhone locks are 195m long x 12m wide but this baby is 23.5m deep! It’s hard to describe what it’s like looking back up at the cathedral-type lock gate wondering what the hell you would do if it gave in. It really doesn’t bear thinking about! 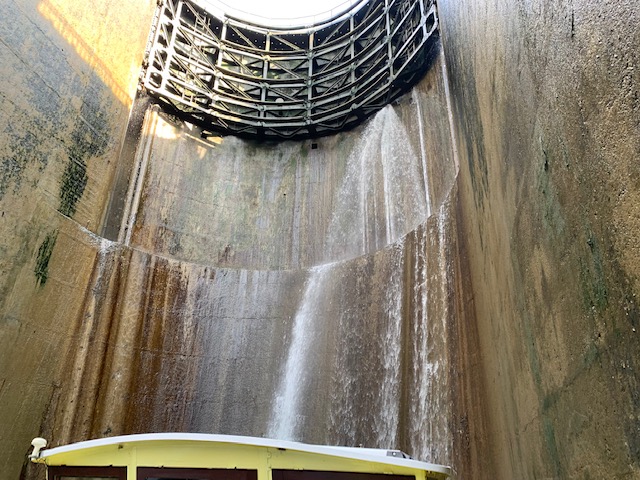 Thankfully all went without a hitch, as did the other 2 locks we traversed today.  Look out for the videos of this…..coming soon!

And so here we are now, sitting in Avignon below the Papal Palace, having skirted around the Pont St. Benezet (you can’t go under it anymore, there is far too much debris in the way for shipping). Hopefully we’ll be able to stay for a couple of days but we’ll be able to let you know soon.