Hello bloggers!!  We are on the move again, taking ourselves and Thirza to Pont-de-Vaux on the Saône for the winter to carry out repairs and maintenance ready for next years adventure.

We left Diou Saturday morning after an hour and a half waiting for water to lift us off the bottom of the canal, where we were stuck fast.  I shall explain; last Monday the canal pound above us suffered a significant breach when the bank collapsed emptying the contents of the canal into the farmers field below.  Fortunately there were no boats in that section at the time and apart from it meaning there was no water to refill the canal sections below it, there was no real harm done and the work was complete by Friday.  What meant we had so little water was the fact it will take some time for the sections below the breach to recover water levels so we struggled to leave the side when we’d planned.

Never mind, we finally got underway and managed to reach our desired destination of Paray Le Monial for the night, despite the thick brouillard that had descended overnight and refused to budge until midday.  Having moored up, we made our way into town for a show-stopping burger in L’Ovale and walked the dogs back through the park so by the time we got back to the port we were exhausted.  An early night was had by all!! 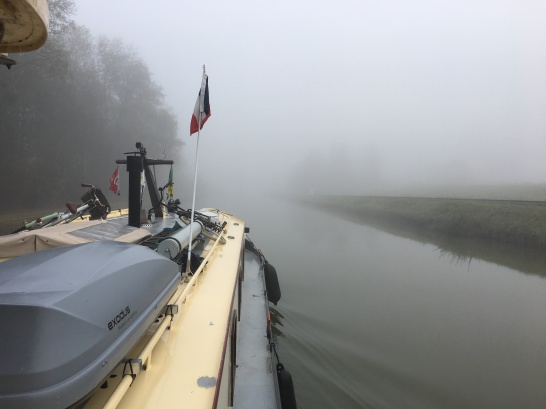 Day 2 and the fog was upon us again.  You’d think it wouldn’t be a problem in the canals but when you can’t see locks and bridges ahead of you – or if other boats are coming in the opposite direction – then it makes for tiring and slightly stressful boating.  Again by midday it lifted and the sun came out meaning jumpers and overcoats came off to reveal t-shirts as the temperature responded to the sun’s rays.

We were certainly thankful the fog had lifted by the time we encountered Adelaide!

We reached our destination of Montceau les Mines by 5pm and enjoyed a little sundowner…….or two!